The lake is 5 miles long, 3/4 mile wide and 119 feet deep. It holds large populations of native brook trout, landlocked salmon and a smaller population of brown trout. Fish the ledges, the shallows or the mouths of Big Sag, Flat Iron Brook or Norton Brook. Brook trout and salmon up to 6 lbs. are waiting to test their fighting skills against yours. Many a trout and salmon have been caught right off the docks in front of the camps.

Of course not everyone catches fish every day…that’s why they call it “fishen” not “catchin”, but chances are you will have the thrill of rising trout or salmon, the set and tight lines!

The Upper Kennebago River and the Logan

The upper river meanders slowly down from Little Kennebago Lake into what is known as the Logan. There are 11 pools on the upper river formed by long shallow runs that drop into deep pools where native brook trout hold up to feed. Much of this water can be comfortably waded most of the year. It’s an ideal canoe trip for dry fly action in the evening with light rod and line. The sightings of moose and deer along the way simply add to the enjoyment.

The Logan is is also easily reached by boat from Grant’s Camps. It is located just the other side of the causeway where the Upper Kennebago River meets the outlet of the lake. Native brook trout in the 10 to 14 inch range are consistently caught here even during the summer months.

The section of the Kennebago river located within our gate has 30 pools to choose from containing trout and salmon and is just minutes from camp. It offers 6 miles of free standing granite boulders and pool fishing.  The dry fly enthusiast and streamer fishermen won’t be disappointed.  We have seen salmon up to 8lbs caught along with 5lb brook trout.  Of course, the average is somewhat less……but that’s fishing!

Fat brook trout (8″ – 14″) on a light rod with small flies (#18 – #22) make for great spring fishing! We maintain a dock on the south side of the lake at the east end of Kennebago. From the dock it’s a one mile, well marked hike. We keep 2 canoes for our guest at the pond. It’s fly fishing only. It’s a “must do” for many of our guests, so let our office and your waitress know the night before you plan to go and we will have a picnic lunch packed and ready for you. 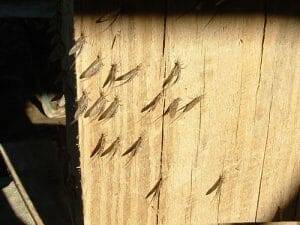 After the ice leaves Kennebago Lake smelts are found in great quantities in the lake at the mouths of the brooks. This is where trout and salmon feed also. Smelts or small baitfish imitations seem to be the preferred patterns with Hendrickson hatches on warmer days, after 1:00 pm. Red Fox Hornbergs, Black Leech and Dragonfly nymphs are particularly productive early in the season.

By the first week of June, the spawning run of the black nose dace begins. Fish the inlets and outflows and the sandy shorelines. The Black Ghost, Black Nose Dace, Nine-Three or Herb Johnson in smaller sizes – 8’s and 10’s seem to produce well in early June.

As the water warms dry fly fisherman will find plenty of fish in the shallows of the Logans. The Red Quill and Blue Dun are the first major hatch on Kennebago. During this period the ends of the lake are most productive.

Toward the middle of June, begins the Green & Brown Drake hatch. Wulff patterns work well during this period The large Green Drake hatch usually last up to four weeks. Also use terrestrial imitations.

Into July, at the end of the Green Drake hatch, the bronze beetle and black ants lead the fly list with the old favorite, the Kennebago Muddler. Sizes 8 to 14 are most popular.  Our most popular flies for these hatches are all available in our fly shop in the office.

As the water temperatures heat up the bigger fish head for deeper water. During these times we fish Crayfish, Leech and minnow imitations along the rocky bottom.

The Logans and the Upper River are fished best after a late August or early September rain using a Mickey Finn bucktail or Kennebago Muddler (#10s) for fall trout. 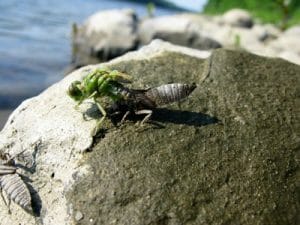 It starts at the base of Big Falls. Grant’s Camps maintains hiking trails and off road parking along the gated 6 miles of the river. We have a resident population of native brook trout all season long. The spring salmon begin migrating up the river by mid-June. Wulffs, Black Ghost, Grey Ghosts and Red Fox Hornbergs work well during this early period.

Toward the end of June and during the warmer months of July and August stones, light cahills, terrestials and midges work well. Fall run salmon migrate upstream on the first heavy rainstorms in late August and early September. These fish seem to prefer streamer patterns such as Colonel Bates and Black or Grey Ghosts.

Flyout service for a scenic ride through the mountains or for a day of fishing with a picnic to Rapid River, Sabboth Day pond and C Pond transportation by Acadian Seaplane. Catch a flight right from a dock at Grant’s and be back in time for dinner. Make reservations before arrival. 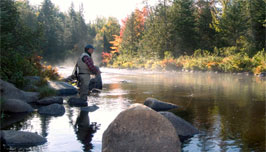 Some of the best fly fishing, not only in Maine, but on the entire East Coast!

Get Your Maine Fishing License

Maine Hunting and Fishing, Resident and Non-Resident licenses available for one, two, three day and yearly are available for purchase in the office every day of the week. 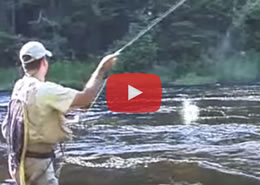