Kennebago Lake… A Rich History of Fly Fishing and Adventure

The name Kennebago comes from the Indian tribal name meaning -The Land of the Sweet Flowing Waters. These native peoples were still returning to these waters as late as 1855.

In 1863, the stories of brook trout weighing as much as 8 lbs. first appeared in the newspapers of Boston and NY. These reports were met with skepticism and most experts believed that these fish must actually be lake trout. The debate was soon resolved when a 7 lb. beauty was sent to a professor Agassiz, who confirmed that these monster trout were indeed genuine specimens of the speckled or brook trout family.

Soon the wealthy sportsmen and women from the cities were making their way to Rangeley, ME and then into Kennebago. Dressed in heavy woolen knickers, they hiked through the thick woods for 9 hours to a primitive shelter at the head of the lake. By the late 1800s and into the early 1900s access improved. You could now reach the lake by buckboard… a 12 mile, bone-jarring ride from Rangeley. In 1913 Rail service to Kennebago was complete and visitors could take an easy ride on the Rail Bus from Oquossoc to the head of the lake. There were also steam boats on the lake to pick passengers up and transport them to various camps along the shores. The remains of the Kennebago III can still be seen resting on the south shore at the east end of the lake. The great depression spelled the end of the rail and steam service for Kennebago Lake.

Many famous people have come to fish the waters of Kennebago. Folks like, Fly Rod Crosby, President Hubert Hoover, Governor Baxter and the poet John Drinkwater.

Times have changed and you can now easily drive or fly into Kennebago Lake. However, upon your arrival, what you will find is that not much has really changed. The water is still sparkling clear, the air fresh and invigorating, the moose still feed in the Logan, the loons still call out to us at night and the trout and salmon still rise to our gaudy flies.

Enjoy a boat ride around the perimeter of Kennebago Lake with a self guided map of historical special events, people and land marks to learn more about the uniqueness of the lake. 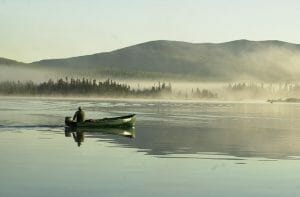 Rangeley an area rich in beauty and history.