Grant’s Camps, Kennebago, Maine – I sat on the screened porch of our rustic cabin last evening and gazed quietly eastward across Kennebago Lake. A chilly northeast breeze kept the ambiance a bit lively, but a fleece jacket and a wool tuque held the discomfort more or less at bay. The lake was too good a prospect to desert for indoors. The sinking sun behind me still lit the hills across the lake, the shadow of each slowly climbing the slope of its neighbor farther east. Just offshore, a loon cruised slowly past, thinking, perhaps, about sushi for supper. Way over by the far shore, a tiny black blob moved on the water – a moose dining on underwater plants. A plastic cup of bourbon beside me provided a touch of elegance to the placid scene.

Two friends and I drove here yesterday from the Connecticut Valley – it’s surprisingly short hop across the border from northern New Hampshire- and they were off pursuing the trout and salmon newly energized by the colder water and spawning season, in the lake’s outlet river. I’d tried it earlier for a while on tottering legs, but found the intense beauty of the situation less exciting than its intense peril, so retreated to the cabin and the new book I’d brought. The name of the cabin, for some reason, is “Mandalay,” but someone before me, similarly inclined to quietude, has removed the “Y” from its name beside the door, converting it from the scene of bustling British colonialism to one of Eastern meditation.

The remaining Maine sporting camps today are at some pains to observe and preserve the traditions of over a century and a half of their existence. Grant’s is no exception. The walls of the cabins and the dining room are hung with ancient photographs and large fish. The office sells locally tied flies and recommends the patterns du jour. It’s all on the honor system: Just write down what you’ve taken and charge it to your cabin number. A brochure with a map names all the pools on both the upper and lower rivers. Guests either disperse to the rivers first thing after breakfast or take out a boat – the dock boys are as eager as bellmen at the Savoy – and fish the still waters of the lake and the “Logan,” where the rivers meet and slow into a large pool.

It’s fly fishing only and everywhere; no trolling, spinning,or bait. To the uninitiated, this may seem a handicap, but a good fly fisherman with the right patterns at the right moment can do a great stroke of business. We spoke this evening with two dyed-in-the-wool fishermen who’d caught and released over two dozen brook trout during the day. I’ve never seen fishier water anywhere else in New England, except perhaps in closed private ponds.

In many ways, the history of these camps and this area pretty well describes the evolution of recreation in the North Woods. The Abenakis resorted here for the summer months till about the mid-19th century, when they were pushed out by ever-encroaching lumbering operations. As the timber petered out in the 1860s, travelers from Boston and New York carried home news of huge brook trout, up to eight pounds, lurking in the waters of what were called the Rangeley Lakes.

It was the heyday of the railroad. Trains from southern New England, running up the coast and then the Androscoggin Valley, opened the Rangeleys to tourism. This was a tremendous economic boost for the area’s residents, many of whom opened guest houses, inns, and even grand hotels near the end of the rail lines. But those days of heedless exploitation of resources led to fairly rapid depletion of the cornucopia. An old photograph in our cabin shows two guides, a sport, and three ladies in ankle-length full skirts holding snowshoes and about six dozen trout, caught on an ice-fishing foray. Hotels, in order to provide their guests with authentic Maine cuisine, netted trout by the millions, especially the unique blueback trout (Salvelinus alpinus oquassa), until there were almost none left. To improve the fishing, some entrepreneur introduced landlocked salmon and smelt; today the blueback is extinct in all but a very few ponds in far northern Maine.

Kennebago Lake, however, seems to have spared the brunt of the development by its distance from the rails; about twelve miles over a rough woods road. Sports either trudged behind the wagon carrying their gear or risked their vertebrae on the jarring ride. Later, a bus that ran on rails operated between the train station and a roundhouse here near the lake. Ed Grant, the founder of this enterprise, had built his first camps on the lake in 1875.

I get the impression that the sports who’ve traveled the extra distance to Grant’s Camps have traditionally been more conservation-minded than those who fish the more accessible lakes to the south. One guest, writing verse back in the 1920s, lauds the practice of catch-and-release fishing in order to preserve the possibility of catching large fish here. Whatever the reason, there are plenty of large trout and salmon in the lake and the river. The riverside trails that once were churned to mud by the boots of river drivers in the spring are now printed by the calked soles of waders.

Today’s the last day of the river fishing season, and the camp is almost full. The crowd keeps the one energetic waitress on the jump at meal times. For breakfast, you can order pretty much anything you want. Last evening we dined on a really good standing rib roast; tonight it’s a choice of steamed lobster or steak. Tomorrow is still lake fishing season and the first day of bird-hunting; there are some really good-looking pointers here and there around camp, and a Springer Spaniel. Hunters, instead of comparing flies that have worked for them that day, discuss their dogs’ idiosyncrasies. One lamented that his pup wouldn’t hold its point till he got there, and heard lots of advice on how to correct her. I was just enjoying listening, when a small pointer came in, looked up at me, jumped up in my lap, and settled down with a sigh. Best moment of the trip. 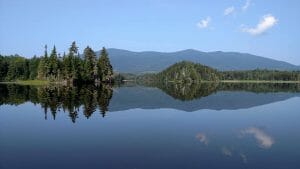